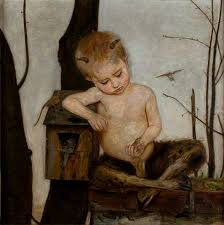 Vlastimil hofman was a painter who representing the symbolist trend and also traditionalist art. He was born in Prague in 1881 and died in Szklarska Poreba in 1970. Since 1889 he lived in Cracow, together with his family. There he studied at the School of Fine Arts in 1895-1899. He studied under direction of Florian Cynk, Jacek Malczewski, Józef Unierzyski and Jan Stanisławski. He was educated in the Ecole des Beaux-Arts with Jean-Léon Gérôme in 1899-1901. He continued his studies at the School of Fine Arts under the direction of Leon Wyszczółkowski. After a year's residence in Paris, he returned permanently to Cracow. He made numerous study trips to Italy, he traveled to Vienna, Prague and Paris. During World War II he was in Palestine. He returned to Poland in 1946 and then he settled in Szklarska Poręba in 1947.

He was a member of the Czech Society of Artists - "Manes", the Society of Polish Artists - "Art", the „Group of Five” and „Group Zero”, and also the group - „Native Art”. His works were often exhibited both in the Cracow Society of Friends of Fine Arts and Warsaw Society for the Encouragement of Fine Arts. The artist was considered as a follower of Jacek Malczewski's work. However, despite these analogies and close relationship with his art the works of Hofman have a distinctive style and character.

The main themes of the Hofman's are also religious scenes ( "Hope", "Complaint"), as well as fairy-tale fantastic topics ( "Lost happiness", "Funeral of the bird"), or antique threads - ( "Spring", "Faun with grandfather"). During the works creation the artist guided by the principle of narrative, focusing on anecdote and performance staging. Scenes from the life of highlanders, peasants often appeared in the Hofman's work. Paintings often accentuated the decorative of costums and folklore ( "Two Hyrax"). The linearity played also the key role in his paintings. It was certified mainly by clear contours and interesting combination of colors. The skill of real playing the facial features could be seen in a series of self-portraits, created in various stages of the artist's life, for example "Self-Portrait with a Palette", „The artist and his muse”," Self-Portrait. In workplace".