Jewish painting on a Polish lands 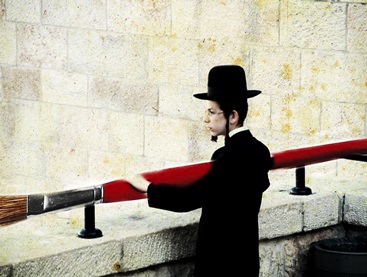 In the midst of many celebrated Polish painters to attention deserve  the creators of Jewish origin.  Aleksander Lesser belonged to the well- known artists in Poland. Respected mainly for historical painting, but in his work can be found also biblical scenes. He is the author of 40 portraits o polish kings, and for that reason he is considered as an artist like Jan Matejko and also his predecessor.  In his works he showed the most important historical situations for Poles. These are, among others  „ The Prussian Homage”, „Last moments of Nicolaus Copernicus”, Saint Jadwiga of Silesia blessing his son Henryk II the Pious Prince of Legnica who was going for an expedition against the Tatars in 1421” or „ Funeral of 5 demonstration victims  in Warsaw - 2nd March in 1861”. Although the artist's origin,  the Jewish theme was only small topic in his work.
The exact opposite is the work of Maurycy Gottlieb. The artist is considered as a father of Jewish painting, which is supported by the nationality of the painter and also by the theme of his works – typical for the culture of Semitic nation. It should be mentioned that the work „ Self-Portrait in costume of Polish nobleman” could be an example of Polish membership by Jewish art.
Recaling the theme of Jewish identity it should be also mentioned  the Holocaust period. The work of Roman Kramsztyk accurently presents the tragic experience of that generation, as well as a strong sense of belonging to the Polish Jews. The confirmation may be the fact that the artist freely stayed in the ghetto, he has not used the chance of departure from Poland. Before the war, the artist was known for his original landscapes which referring to post impression techniques. He created many portraits, sometimes with a metaphorical sense. He created works which documenting the cruel living conditions of orphans and homeless Jews. He was shot during the liquidation of the Warsaw ghetto.
These examples represents only a small part of the works of artistic value and providing for cultural diversity and common Polish-Jewish history. The borders  between Jewish art and typically Polish art should not be marked by force. Their realistic blurring should lead us to look at art beyond all national or social divisions. It is appropriate also to say that Jewish painting on Polish lands  is art which is not subjected to precise categorization.